With my first half marathon just two months away the training is kicking into the next gear at the moment.  Last weekend I ran over 10km for the first time, doing a solo 12km from home to Buckingham Palace, finishing in 1 hour and 25 minutes.  Using that time, plus my usual 10km I decided to set myself a target of 2 hours for my next race – Sunday’s London 10 Mile in Richmond Park.

Going into the weekend I wasn’t nervous at all; last weeks run had given me a much needed confidence boost.  But as soon as I arrived at the event village the butterflies arrived and so did the self-doubt.  Every time I step up my distance I have a thought niggling at the back of my mind that I’m not fit enough, or haven’t lost enough weight to be tackling these distances.  Luckily so far i’ve been able to shut up those doubts and tackle it all head first.  Sunday was no exception.

This was just the second year for the London 10 Mile and I figured this would make a perfect training run for my big-July run as it’s a perfect middle distance between my usual 10kms and the half marathon.  Luckily despite the threat of rain the weather turned out really nice so it was all set to be a great day.

Typically I arrived way too early, getting to the Event Village for about 9am – with the run not starting until 10:30.  But this gave me time to have a wander round, use the toilets a couple of times with no queue and drop my bag.  One thing I liked was the ability to use my own bag, rather than a provided one, meaning I could use my usual backpack, which meant bringing a change of clothes was nice and easy.

Warm up done (courtesy of F45 Kingston) and a quick talk by Paul Hinton-Sewitt CBE, founder of Parkrun, and we were off into the start pens (green for me) ready to go.  This was the first event i’ve done with official pacers, so together with my target time, I decided my plan for Sunday was to try and run a really steady pace and keep close to the 120 minute pacer.  That was the plan, shame I messed it up in the first 10 minutes.

The one thing i’m terrible at is judging my own pace, and so as normal I headed across the start line (and up the first hill that seemed to go forever) way too fast and before I knew it i’d lost total sight of the pacers.  Initially I thought they might still be ahead of me, so I kept on pushing.  At Mile 3 there is a short double back section and as I finished it there were the 120 pacers, just starting and therefore putting them maybe 1/2 a mile behind me.  So at this point the plan changed, I calmed down the pace slightly and decided to try and keep ahead of them, knowing i’d likely slow down when we came to the really big hills.

So talking of those hills – these were pretty brutal at times.  Richmond Park is a beautiful location for a run, possibly the most scenic i’ve done.  But it’s a pretty undulating course and around mile 6-7 it gets steep.  In fact as we were approaching Mile 7 on what felt like an already massive hill, we passed a sign telling us the big hill was coming up!  At this point at least two other runners near me sounded mildly panicked that we weren’t already on the big one!  But luckily anything that goes up also has to come down so there was plenty of relief for the legs, with a nice downhill to finish (the same one you go up at the start line).  Having set myself the goal of 2 hours I knew by Mile 7 that aside from injury I was on a good pace to hit the target and in the end I came in at 01:57:56 which I am SO happy with. 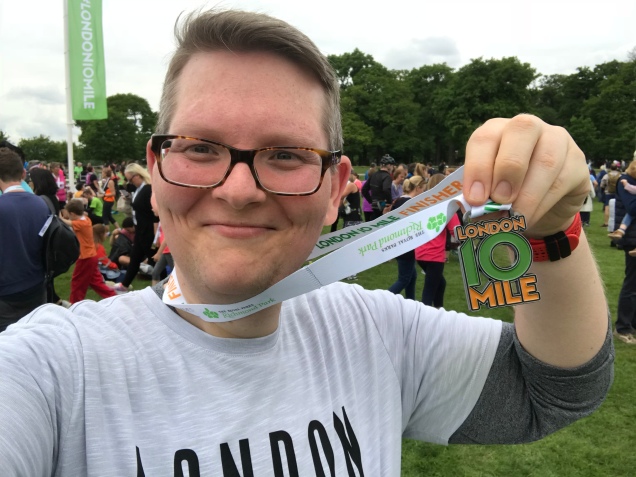 I have to admit that I got a tad emotional as I crossed the finish line.  Sunday’s race continued to teach me that running is so much more than a physical challenge (though it’s certainly that!), it’s a mental one as well.  I’ve always viewed running as a way to get fit but day to day it also helps with my stress and anxiety.  On Sunday however I spent the first 5 miles questioning myself about what I was doing.  Am I going too fast? Am I going too slow? Should I be running up the hills like everyone else? On and on it went for an hour.  But around the 5 mile mark something switched and instead of asking myself questions I started telling myself things – you can do this, you’ve already done more than half the race, look how far you’ve come in 18 months, the old you couldn’t do this.  So when I crossed the line 2 minutes under my target I felt a sense of elation at having done it and having beaten the voices in my head.  I’ve said it before but every time I finish a run like this I take some time to marvel at what i’ve achieved in the last 18 months and that just powers me on to keep going and push on to the next race!

So the big question is would run the London 10 Mile again next year?  The answer is a cautious yes.  It’s a really well organised event, with a great medal and I absolutely loved the course, hills and all, but a couple of negatives do make me reconsider.  Namely it’s an expensive race for what you get at £44 (though the 63 free race photos are a welcome positive!) and the one disappointment was the overall lack of support as you were running.  What I usually love about a big organised event like this is the crowds cheering you on.  Sadly this didn’t really exist in Richmond Park.  Apart from some great cheer squads at Mile 1 and 9 (who gave me a massive boost) and the crowds by the event village, most of the course was empty.  This isn’t the organisers fault of course, more a reflection of the location. But this was certainly made up for by the camaraderie with the other runners as we all complained every time we reached another hill!

Next up i’m running the Westminster Mile/Vitality London 10,000 double at the end of May, but before that i’ll be volunteering at the Hackney Half Marathon handing out goodies to all the finishers.